Life Should Be Lived

I heard this on the radio yesterday morning. It echoes my thoughts today. Please take a moment to read this....

It's Time to Party

Recently, my wife and I were having our devotions and reading our favorite devotional guide, Cosmopolitan. In it was another one of those mindless quizzes. (You know the ones: How Responsible Are You? How Sensual Are You? Do You Have ESP? Will Your Marriage Last?) One of the questions caught my eye. It said:

Which one would you prefer?

a) A wild, turbulent life filled with joy, sorrow, passion, and adventure -- intoxicating successes and stunning setbacks, or

b) A happy, secure, predictable life surrounded by many friends and family, without such wide swings of fortune and mood?

I thought the answer was obvious. Everyone, I thought, would choose the first option. I was shocked to discover that a good majority would choose the second option. And then it occurred to me: I have been working with adolescents for the past twenty-nine years. And, when I ask them to describe adults, one word always comes up -- borrrrring.

As I began to think about it, I realized that most adults I know are boring. They don't have fun anymore. Oh sure, get a few drinks under their belts and they act alive for awhile. But that's not what I mean. I'm talking about being and acting alive all the time.

The truth is that games are wasted on the young. Little kids don't know how to play games. Remember when you were seven years old and you played hide and seek? You'd hide behind a telephone pole with half your body hanging out. No, hide and seek isn't for children. It's for people like you and me. Now that I am forty-six, I know how to hide. I'm a darn good hider.

I have suggested a game of hide and seek to many adult audiences and I am always amazed at the response. I see adults all throughout the group nudging each other, quietly discussing a great hiding place they just thought of, secretly planning a game with their children. It doesn't take much to make most of us realize that we have become too serious, too tense, too stressful. The result is that we have forgotten how to live life. It seems like the older we get, the more difficult it is for us to enjoy living. It reminds me of a description given by the Rabbi Edward Cohn:

"Life is tough. It takes up a lot of your time, all your weekends, and what do you get in the end of it?. . . I think that the life cycle is all backward. You should die first, get it out of the way. Then you live twenty years in an old age home. You et kicked out when you're too young. You get a gold watch, you go to work. You work forty years until you're young enough to enjoy your retirement. Yo go to college; you party until you're ready for high school; you go to grade school; you become a little kid; you play. You have no responsibilities. You become a little baby; you go back into the womb; you spend your last months floating; and you finish up as a gleam in somebody's eye."

A.W. Tozer once said, "This society has put out the light in men's souls." He had it right. The more pagan a society becomes, the more boring its people become. The sign that Jesus is in our hearts, the evidence of the truth of the Gospel is . . . we still have a light on in our souls. We still have a gleam in our eye. We are alive, never boring, always playful, exhibiting in our everydayness the "spunk" of the Spirit.

I believe it's time for the party to begin.

Posted using ShareThis
Posted by April at 7:08 AM 1 comment:
Email ThisBlogThis!Share to TwitterShare to FacebookShare to Pinterest

I just added a new link to my side bar entitled "Wednesdays with Beth". Beth Moore is a phenomenal Bible teacher. If you are needing 15 minutes of encouragement or insight deeper into God's word, check out this link. Beth Moore There are several topics to choose from. Beth speaks for about 15-20 minutes every Wednesday on a television broadcast called LIFE Today. You can fast forward through the first couple of minutes and listen in to just her teaching part.
Posted by April at 10:21 AM No comments:
Email ThisBlogThis!Share to TwitterShare to FacebookShare to Pinterest

But there was this still, small voice all along the way. There was this presence of hope that spoke against my shattered circumstances, saying, "It was enough...it was real...I was there." I would hear it in the moments of quiet, the moments right after a good, long cry. And as I listened I began to question why then it would have gone away? Why then did everything go awry?

It wasn't the friendship that caused the fear. The fear was already there. Friendships had been lost before this. I had been left standing alone before. I had been afraid for a very long time. My experiences had built this secret stronghold inside...this propensity to hold tightly...not out of love and freedom and joy...but out of fear and insecurity and entitlement.

It took losing the thing I held so dearly....to free me from the fear of its loss.


On the outside, you might say, "Oh, poor girl, you have had your heart broken." And you might feel sorry for me...while all the while it looked as if I had good reason to be sorry. But, God, He is so much greater than the loss. He knew that I was afraid. He knew that the way things were was not how they should have been. So, He dismantled it...right before my very eyes...took every last piece and cleaned me out. He knew my sadness, my bitterness, my rage. He knew...because He had felt it all before too. He knew, and He let me walk through every bit of the experience. But not without holding my hand, not without telling me the truth, and not without planning something on the other side.

God doesn't stop writing the story. He has plans way ahead of where we would choose to stop and mourn what we have lost. He goes out and gathers new pieces. He cleans up and shines some of the old ones...He begins to put the pieces together again...one at a time...in just the right way.

This time, in small pictures and windows, He let me see what He was doing...He let me ask questions and talk to Him about it. He put me in circumstances where I found myself surrounded by clues that He was at work. It was as if He was saying, "Remember this piece? This is how it works. Remember when I gave you this? This is what I meant when I gave it to you." Before I knew it...I started getting my hopes up. Before I knew it, I started seeing the things I had been talking to Him about. Before I knew it, I was walking around....unafraid.

I was unafraid...because I had lost my own ability to hold on. The only thing holding me up was God's love. And just when I began to believe how loving God was...I began to trust...that His plans for my life were good...that He really was working in the midst of all my circumstances. I didn't have to hear it from anyone else anymore. I didn't have to question. I had heard it from Him. I didn't have to doubt that He was working...I had seen it for my very self.

And all along...I think that's what He meant to do.


I learned how to listen. I learned how to pray. I learned that I could trust Him. There were days when I wanted to rage and write and say everything I was feeling inside...and I would battle with the still, small voice saying, "Be still...and let me fight for you."....only to hear days and weeks later...that the cries of my heart were heard...and all was reconciled...and I never had to say one thing...I had only to pray and trust and wait.

There are things I only said to God...and just recently I have heard them returned by others and by circumstances around me. It leaves me speechless and in awe of the lesson that it is way better to know that God is answering...rather than to know that you have created a world for yourself...to hold and control in your own strength. I know now that when I am afraid or worried, I have this Friend I can run to...who I can tell everything to...and who I can trust to move mountains on my behalf.

There is no fear in love.
But perfect love drives out fear,
because fear has to do with punishment.
The one who fears is not made perfect in love.
1 John 4:18
Posted by April at 11:43 AM No comments:
Email ThisBlogThis!Share to TwitterShare to FacebookShare to Pinterest
Newer Posts Older Posts Home
Subscribe to: Posts (Atom) 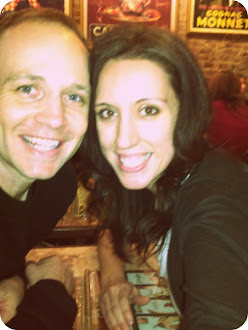